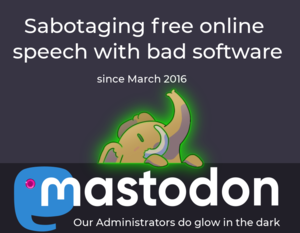 On October of 2022, Elon musk announced that he would buy twitter for a fuck-ton-illion of dollars. Many users, not being fans of his "free speech absoluteism" and "love of humor" decided to migrate to mastodon. This trek was encouraged by the BBC, that made an article about how to move out and into Mastodon. Thousand upon thousands of Normies stormed mastodons flagship instance with Normie trash, crashing mastodon flagship instance. And the BBC journalist lasted less than 2 weeks on Mastodon and is once again active on Twitter. And truly, bringing a smile to our faces.