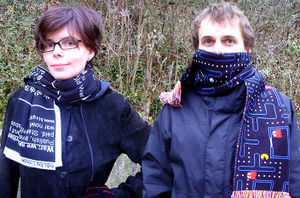 A qt Olia with friend and colleague Dragan Espenschied

Olia Lialina is a philosopher and former net artist. Described as "a survivor of web 1.0", her essays have been widely received. She is currently the head of the Geocities Archival Project, a project designed to preserve and study the early culture of the internet.

A site run with her longtime partner, Dragan Espenschied, hosting many philisophical articles