The GNU logo, and Tux

Tux is the mascot for the Linux kernel.

Through the Linux Kernel Mailing List, a proposal for a Linux Kernel mascot was made. This led to a contest within the Mailing List. Various entries were entered, and in conclusion Linus screwed them all over and chose a penguin. Linus claimed that he liked Penguins, and then stopped the contest in its tracks, making a prototype penguin.

Another email in which he explains his choosing of a Penguin: 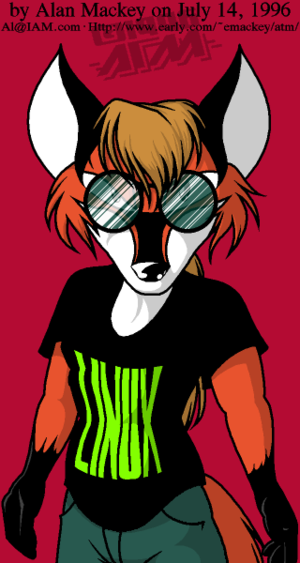 Daily Reminder that the mascot for Linux was almost a furry

This was used on the front page of Kernel.org in the 1990's

Of the alternate mascots purposed, a very accepted, and widely used one was of a Furry fox made by a person of the Yerf Furry Gallery. This was so popular that Linus made a Kernel logo that appeared on the Kernel's website combining the Furry logo with the Penguin logo.[1]

A Wiki providing detailed history on the penguin