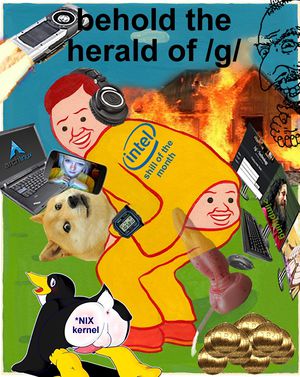 Tox is a WIP secure instant messaging client. It's meant to be a Skype replacement, created directly in response to the Snowden NSA leaks.

LiveChan is an IRC-like 4chan clone with dynamic post updates and loads of other features. Programmed in node.js by emgram, LiveChan is still in development. Open-source, but non-free software.

Jiyuu Linux is a Gentoo-based GNU/Linux distribution with the purpose of being relatively entry-level for new users, but teaching them how to be proficient in GNU/Linux. Still in development.