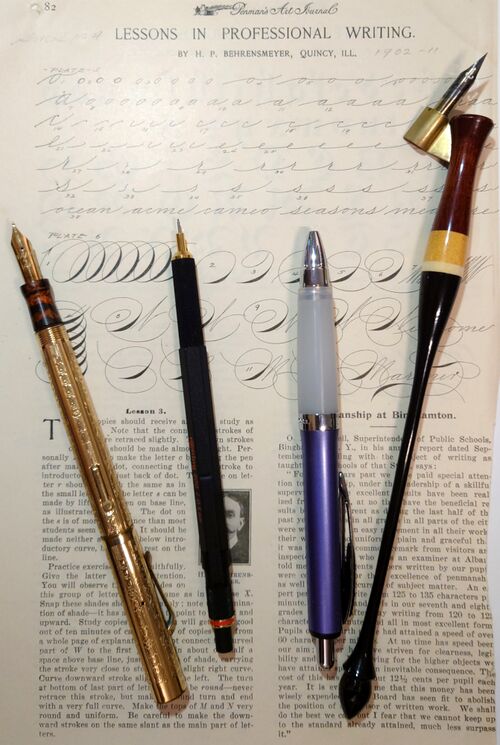 4chan has for years had a Pen and Pencil General. This entry is a compilation of the insight and experiences from this general. Past discussions can be found on Desuarchive. This general goes back to 2013. 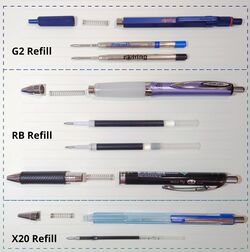 When talking about pens normally, one would often talk about both the pen body and the ink as a package. Indeed the following recommendations assume this as it's the easiest approach when advising, however it is often possible to buy inks separate from their normal pen bodies (called refills). For example one can use a Rotring 600 ballpoint body with a Fisher space pen refill, so functionally it would have all the benefits for a Fisher space pen (pressurized cartridge, write in space, etc) but in a different body. Pen refills come in a extensive variety of types and you must selecting one compatible with your pen if you plan on using refills.

Pencils with attached erasers are marked [E]. [R] for pencils with replaceable erasers. Costs are per dozen.

The world of mechanical pencils is still surprisingly innovative, with a huge range of options to suite anybody in the market. Options vary from drafting mechanical pencils to ones for general writing as well as niche choices that will suite any occasion.

Typically these have a metal outer body with knurling on the section for grip. The inner mechanism is commonly plastic however and is often a weak point, many drafting mechnical pencils malfunction or break due to a failure in the plastic components that make up much of the inner body.

Leads for drafting or writing 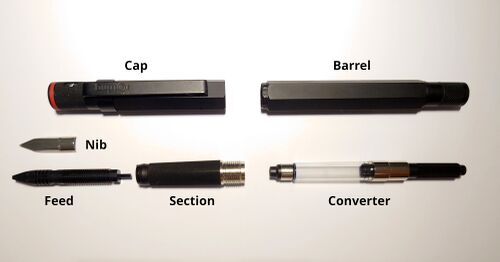 Disassembly of a Rotring 600 Fountain pen

Prior to purchasing your first fountain pen, you should try to ask yourself the following questions:

The first point sound obvious but can be tricky to get correct without physically being in a store. A larger pen will typically be easier to grip and relax wrist issues much more then a thin stenographers pen. Weight isn't generally an issue unless it's oversized or if the construction is all metal.

Second point involves the writing itself. The nib takes center stage here together with the feed. A steel nib will always be as hard as a nail (unless otherwise stated) when in contact with the paper while gold nibs will have a slight softness that cushions your writing. Contrary to what is commonly told, a gold nib will not be smoother nor have magical penmanship increasing powers as the tipping material that actually contacts the paper, iridium, is the same as on steel nibs.

The feed regulates in ink flow coming out of the nib, the two polar ends being called "wet" (higher ink flow) and "dry" (low ink flow).

Inks also come in "wet" and "dry" which can have a further multiplying effect.

Experience beyond writing involves how easy the pen maintenance/filling is and can extend to warranty as well has customer service of the company. As general maintenance practice, pens should be flushed with water every six month to clean out the feed though this frequency will change depending on situation. If you're changing inks or use certain inks such as permanent inks, they will need to be flushed with water sooner.

For the filling system considerations include:

Company warranty and overall customer service can be summed up as follows:

Companies may not provide services for purchases made from non authorized retailers.

These pens are a good starting point. Japanese pens will be cheaper if you import directly from japan and if you're on a budget remember to factor in ink costs.

Pens starting from $0 to roughly around $15, You get what you pay for in this category, plastic will feel a tad flimsy.

There is a huge step up here in terms of pen body material quality and overall feeling in your hand. one thing here is that outside of the Japanese brands you should seriously consider purchases from trusted retailers whom you can request a check on your pen for defective nibs. $75 to $300

Although there are material and quality improvements to be had here, most if not all brands claim craftsmanship as a primary factor here. For a prospective buyer however you should rely more on the pens appearance and style. $300 ~ $1000

Pens at this price point are almost always limited/exclusive edition, possess some form of artistic merit, use expensive materials or all of those combined. $1000+

When purchasing ink, prices are highly subject to location. For example whilst Noodler's ink may be a very cost effective ink when purchased in the US, Diamine is significantly cheap enough in the UK to make Noodlers redundant for general use. This is because Diamine is manufactured in the UK, similarly in France you would consider J.Herbin as your best option price wise. Virtually all Japanese products are cheaper in Japan and inks are no exception.

Try to store your inks in a cool and dark environment, this is to prevent fungus and bacterial growth. Although inks have preventive measures such as a base pH (with Japanese inks) or fungicide (with most western brands) it is possible for them to exhibit fungal growth under the correct conditions, albeit very rare.

WARNING: Document black and Drafting black are for dip nib only and should not be used in a fountain pen.

In addition to the two lines, Sailor produces a large amount of other inks and inks not under Sailors name (Bungbox for example is made by Sailor). Any old reference to sailor Jentle inks should be ignored, it's a discontinued line with some of the colors absorbed by the Shikiori.

A reasonably priced and high quality brand. Their regular line of inks has over 100 different colors which should be more then enough for most people. However certain colors need additional care as they cause staining on plastics and do not pair well with certain pens.

There are also 30ml tester bottles for purchase.

Oldest ink manufacturer. Based in France and most well known for their shimmering line of inks.

Made by Nathan Tardif as a solo operation, these inks are most well know for their variety of properties compared to other inks as well as cost to performance. Extraordinarily large catalog of inks so it can be difficult to know what's what. In addition Noodlers inks can be a bit fussy with paper, their Bulletproof line for example doesn't pair well with Rhodia paper. ALL inks come in 3oz bottles but a few select inks come in larger sizes.

Most famed for it's Watermans Serenity Blue which together with Lamy blue hold the title of most well behaved, safest and low maintenance ink to use. Works in virtually any scenario. Come in 50ml and available at most retailers. Waterman also has a FAQ.

No special inks, just regular plain and boring blue, black and blue-black. Lamy blue is in particular the dry version of Watermans serenity blue. An interesting note is that all Lamy pens are tested at the factory with Lamy blue which is why it is possible for a brand new Lamy pen to contain traces of blue ink.

Pair your nice pens to some nice things. Some of the following is pretty important depending on what you've got. For example you'd really want some nice paper if you got yourself a wet and sloppy medium nib fountain pen (and fountain pens in general really).

People will tend to associate gsm with paper quality and that's not wrong but it gives the impression that low gsm is bad which isn't always the case. All the paper listed here can take ink with neither bleedthough nor feathering even under thick shades but do note that paper soaks up moisture and that will cause feathering. Although this can happen under high humidity it's more commonly caused by sweaty hands.

Some nice pen cases, consider them if you have some better quality pens that you don't want to just throw into a bag.

For modern readily purchasable nibs, it is heavily recommend to buy only Japanese nibs especially if you're a beginner for a smooth pain free experience to ease you in. All current non Japanese nib producers, that is manuscript pen company (who owns Gillotts, Leonardt among others), Hunt and Brause all have varying QC issues primarily concerning misalignment tines. Minor Tine misalignment issues are difficult for a beginner to assess and can have a huge impact on the behavior of the nib. The ideal options is to try a nib sampler first which is available from virtually all reputable online nib retailers. The following guide can be used to give a rundown of avaliable nibs and provide some help with what to purchase.

Purchasing/usage guide - For both modern and vintage nibs

From the manufacturer, dip nibs have a thin coating of oil to prevent rust and to preserve the metal. This must be removed prior to use, of which there are a variety of ways this can be done. To prep the nib one can do any one of the following

For recommended nib holders, it is best to buy a cork-tipped pen holder. These take standard sized pointed and broad nibs, exceedingly cost effective and can be found as low as $3. These is no discernible difference in quality with these holders when it comes to brand name or price and as such it's a case of buy the cheapest.

It may be worth checking out the Tachikawa T25 or the T40. These are ONLY intended to hold japanese G-pens and crow nibs and thus can't fit other nibs that don't match their profile.

Oblique Pen Holders are beyond this guide but do know that they exist (and that the Speedball ones are kind of rubbish,you should only consider ones with metal flanges).

1.^ "Interesting Blog On Why Some Twsbi's May Crack", FPN thread about using polarizing filters to view stresses in plastic pens. Post #5 demonstrates the stress lines in a TWSBI 580 and compares it to a Pelikan M200.