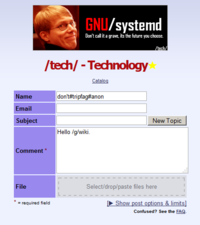 Archival. First thread on /tech/. No.1/2 were both board stickies.

/tech/ - Technology took off around September 2014. The board initially populated by few users has grown to be amongst the most active 8chan boards. In the first 1-3 months of /tech/, majority of it was populated by /v/irgins who were interested in technology discussion and a few /g/-refugees. The board was more proprietary friendly (and really just somewhat friendly in general), but over time more of /g/'s community migrated here after hearing of the exodus. While they brought in a new and larger userbase of contributing and helpful anons, some shitposters decided to tag along. We welcome new users, but please consider if your thread can actually generate any quality discussion before posting.

Satirical Linux kernel fork on open source diversity, conceptualized by /tech/. The official github repo was eventually disabled by staff because of complaints.