CLEANUP CANDIDATE
Relevant discussion may be found on the talk page. Reason: Taken almost entirely from a now dead (but good) website, this article should be reworked into a proper encyclopedic format

Cyberpunk began as a subgenre of science fiction that's "high tech and low life." The genre generally focuses on the conflict between hackers and corrupt governments and megacorporations, in a dystopian near-future setting. Subtexts of the genre, like in William Gibson's prophetic novel Neuromancer, often deal with the social (and occasionally economic) impacts of new technology like cybernetics.

Soon after its popularity rose, Cyberpunk became a designator for the freelance computer hacker, independent of the literary genre. The author who invented this term was surprised when this occurred. Cyberpunks in this sense are fundamentally a culture of hackers whom use their technological process to augment themselves, and "fite da machine". 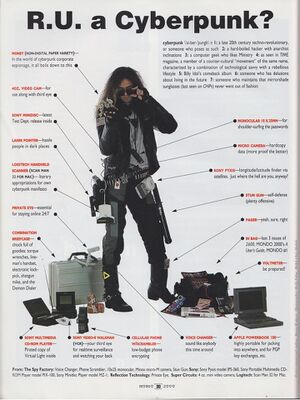