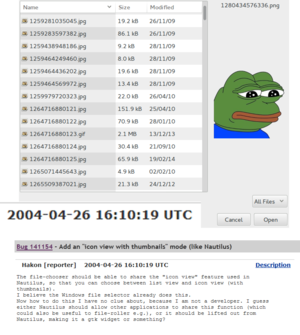 A typical implementation of the file picker meme can go two ways. One way is to take the head-on approach, often greentexting a few lines, the first of which normally mentioning the year, the next pointing out that the file picker bug has not yet been fixed, then the next few lines implying that the lack of this feature means that Linux is inferior to Windows. Another approach is to pretend to be oblivious to the meme, and act as if the thumbnail view of the file picker is a feature that exists but he cannot find. With either method, one is guaranteed to attract attention from overly passionate Linux users who will stop at nothing to defend their operating system. 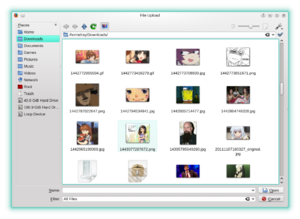