Difference between revisions of "HAM Radio"

Ham Radio is an old hobby that has origins as far back as the late 1800's. It was formalized as a hobby in the early 20th century. It is an over-regulated piece of shit, but what isn't now a days.

Testing In The US

Element 2 Technician 35 out of 426 questions from this pool

Element 3 General 35 out of 462 questions from this pool

Find Testing Locations In The US

Get Your FCC Registration Number

You will need either an FCC Registration or Social Security number in order to take the exam. It is not necessary to register beforehand with the FCC, but it will speed things along if you bring the paperwork.

For a fee of $15 USD you may take one or all three tests in one sitting at no additional charge. If you fail a test, you may spend an additional $15 USD to retake it. Your license is good for 10 years with a 2 year grace period to retest after expiration. You are no longer required to know Morse code for any of these tests.

FCC Part 97 The US Amateur Rulebook

Maths You Should Know

Wavelength is represented in Meters as λ

Frequency is represented in Mega Hertz as f

This is the basic formula to find full wavelength in meters for a given frequency.

Loop Antennas are full wavelength with one element.

Dipoles are half wave with two elements.

Ground Planes must be at least quarter wave with one vertical and four radial elements.

3 Element Yagi Yagis are directional antennas consisting of a boom with reflector, driven, and director elements.

RG6 is common and cheap, but higher resistance at 75 Ohms. You should not use this.

RG58 is cheap, 50 Ohms, and perfectly acceptable for HF.

RG8X is slightly more expensive than RG58, but lower loss.

RG213 is double the price of RG58 and RG8X, but lower attenuation at higher frequencies.

RG8U is almost identical to RG213 in price and attenuation, but has lower loss per 100ft.

LMR400 is exceptional at higher frequencies as well as low. If your software radio can do 1GHz-6GHz, this is what you get.

A Q Code is a shorthand for Ham Radio. It was formalized in the Morse Code days.

These are the standardized, modern Q Codes recognized internationally.

These codes are specific to the Amateur Radio hobby

To ease congestion on the line, the ARRL has made numbered radiograms to summarize direct messages to other users. These also are primarily used on CW transmissions. Other services, including the US Military, and the police, have their own Radiogram systems that are incompatible with this. The ARRL has other forms of radiograms, but the numbered system is the most common. An example of this in practice would be saying CALLSIGN CALL CALLSIGN2 ARRL SIXTY TWO CHRISTMAS. These are what are more commonly known as "Brevity Codes" 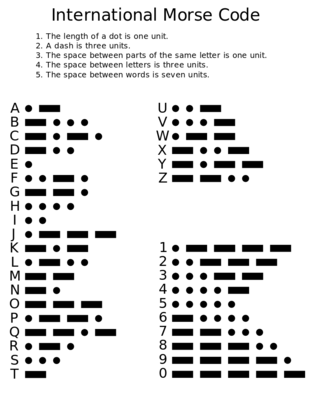 Morse Code, also known as Continuous Wave (or CW) was once required for passing your test. It now is no longer required, but a good skill to have. Morse Code is easier to learn than you'd think. Each letter and number actually is based in the shape of the character. Learning this way is known as the Mnemonic method.

A person with satisfactory understanding has a WPM of about 30, while more advanced operators can have upwards to 90-110 WPM. Once you are an advanced user, you will no longer hear dits and das but you will hear the words as its own language.

If your antenna is outdoors, you should take precaution to prevent yourself and your gear from becoming dead. Metal antenna mounts should be grounded using 10 gauge insulated solid core copper wire. Your coax should have a lightning arrestor between the antenna and your equipment. The arrestor should be mounted near the lightning rod it's grounded to. To prevent moisture ingress, the arrestor and coax connectors should be placed in a plastic electrical box. If you have a wire dipole antenna, you should use ceramic insulators at both ends and guy rope to tie between two points.