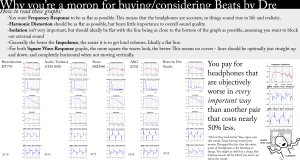 Small test on Dre Beats, Steer clear of them! 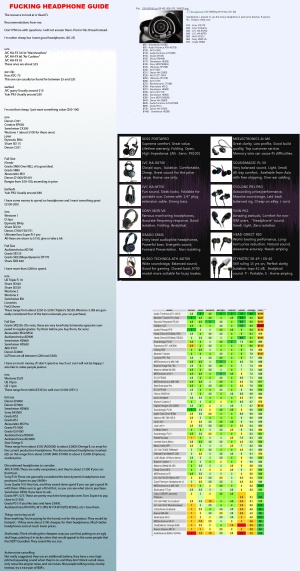 A decent guide, but lacking the downfalls of certain headphones. 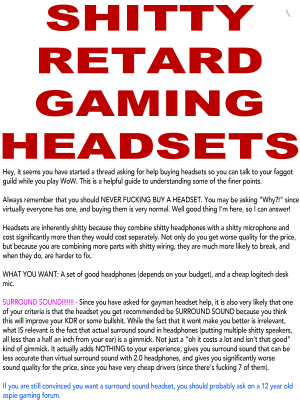 Why NOT to buy Gaming headsets 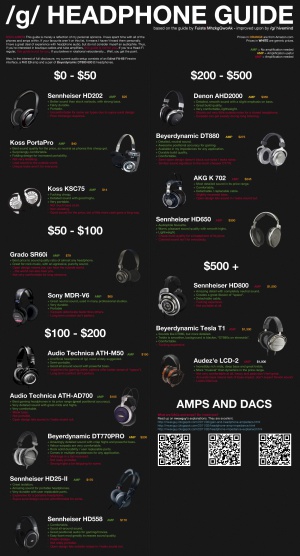 Another good guide. This one lists the downfalls of certain headphones.

A guide for good headphones under $100 USD. 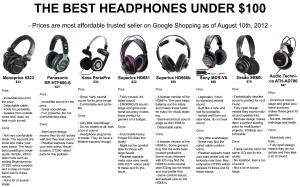 Another guide for cheap (under $100 USD) headphones.

Headphones are a source of frequent discussion on /g/. Basic rules are to avoid Beats and other fashion over function brands such as Skullcandy (some of the newer Skullcandy headphones are designed in house, with improved audio quality). While discussion of headphones is welcomed, generally threads based upon which headphones you should buy are discouraged. The threads frequently find the same guides posted in (many of which can be found on this page).

Remember: there are no objectively better in terms of sound. The “Small test on Dre Beats, Steer clear of them!” picture says: “You want Frequency Response to be as flat as possible.” – this is not necesarily true. Beyerdynamic’s DT880 is considered detailed and neutral, yet it’s not the most popular headphones. We can speak about how HifiMan’s HE400 has very recessed mids, but whether that’s a pro or cons is for yourself to find out. Then there’s parts we can warn you about, such as build quality.

When you find interesting headphones - research them before buying. Head-Fi and Headfonia are both two great sources to find out opinions and how they actually sound, and whether people have had any troubles with them.

The world of audio is filled with snake oil products, such as magical stones, hangers and silver cables. If something sounds too good to be true, do some research on them. However remember that shouting out “Placebo retard!” will get you nowhere. Always backup your claims with evidence.

Amplifiers and DACs are a necessary part of your digital audio system. The DAC converts your music from 0s and 1s into analog signals, and then the signal is amplified by your amp. People often ask if they need an amp or DAC, and the answer will depend on the following:

There are a few types of amp and DACs, and they serve different purposes. An amp or a DAC can be portable, meaning you can simply put them in your pocket, and then enjoy the music on the go. Desktop amps or DACs can go from the tiny USB powered FiiO E10 and all the way up to the size of a Beta22. Amps and DACs are either be two stand alone units, or a single device. For example the FiiO E17 is a portable amp/DAC two in one, and the WooAudio WES is a vacuum tube based desktop amplifier for STAX electrostatic headphones.

With ampilifiers most people want a neutral and transparent sound signature, meaning the amp doesn’t change the sound in anyway. However some people prefer amps that change the sound, because of this, many vacuum tube based amps are made with the intention of reproducing a colored sound

A frequency response graph tells how a headphone will reproduce sound, whether it’ll have emphasized bass or treble, or relatively neutral, but it does not tell you the whole story. There are other factor such as distortion and decay involved. Headphone measurements are not yet mature and somewhat imperfect. The results will even change with a very slight adjust of the headphones being measured. Keep this mind when you’re using frequency response graphs to compare headphones.

Some sources of FR graphs

Some things to look out for in headphones

Headphones come in many forms, and some may not suit your needs, so always be careful when making a purchase with your hard earned money.

Headphones have different form factors, such as on-ear (supraural), around ear (circumaural), in-ear (IEM) and earbuds.

A headphone can also be open or closed. An open headphone usually have a mesh at the back of the earcups, which allows the sound from the headphones to travel outside, but also allows external noise to enter. Open headphones are said to have a larger preceived soundstage. Closed back headphones are the most common type. It does not have openings, and offers isolation. They are commonly associated with “basshead” headphones, which adds more bass to the reproduced sound.

Headphones are usually wired, and wireless headphones are normally thought of as inferior, due to the need to add extra components into the headphone. The cables for wired headphones come in detachable, and attached. Detachable cables offer more convenience, allowing different lengths of cables and cables with mics to be used.

There’s also a Headphone Price Guide by Boxfish if you’d like to find a good pair of headphones within a certain price range (including their sound signature, uses and amping requirements).

If you frequently play video games or watch movies, you may want virtual surround for your headphones. Virtual surround converts the multi-channel signal from movies or games into 3D stereo, simulating the experience from a real surround sound setup. This should not be confused with physical surround headphones, which carry multiple speakers in each cup and do not enhance the experience, so they should be avoided. To get virtual surround, a DAC that can process virtual surround must be used. The most widespread technology that achieves this is named Dolby Headphone, which is supported by numerous DACs, including ASUS Xonar sound cards. 3D sound works by applying properties to the audio that real sound has in a spatial environment. This is formally known as head-related transfer function (HRTF).

Battle of the Flagships