Difference between revisions of "Linux Mint" 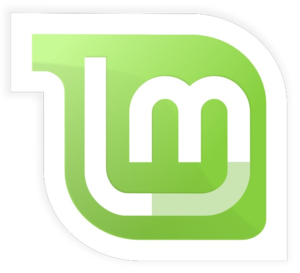 Linux Mint logo
Warning: On 20 Febuary, 2016, Linux Mint's website was hijacked and a compromised, back-door'd distro was linked on the download site. The problem was fixed the next day, however this shows the lack of security in the management of the Linux Mint system. Use with caution. source

Linux Mint is a multi-purpose, Debian and Ubuntu-based distribution meant to be easy-to-use and working out-of-the-box. Originally a sole Debian derivative, most of its repos and a fair share of its software suite are now based on Ubuntu's. Its motto is "from freedom came elegance".

Because of its policy of providing an integrated, smooth experience, Linux Mint has been often praised for its user-friendliness and ease of use, and ranks #1 at Distrowatch (as of February 2014), surpassing by far even Ubuntu. However, it has been criticized for the very same reason by freedom advocates because of the inclusion of proprietary codecs needed for Adobe Flash to be working out of the box.

Linux Mint comes with mainly two desktop environments: MATE and Cinnamon, both of which are being maintained by the Linux Mint Foundation. Their popularity is such that they have been repacked in other distros, such as Antergos or Cubuntu. KDE and Xfce versions are also officially maintained.

In short, Linux Mint is one of the best-suited distributions for beginners to GNU/Linux, or anyone wanting to get a desktop up-and-running quickly.

Why use Linux Mint?

Linux Mint running inside of Windows

Linux Mint is often recommended as a newbie's first distro for it's ease of use and ease of installation. Having said that, everyone's first Linux install can be scary or confusing. This section will step you through a basic Mint install.

The Official Mint User Guides also guide you through installation, but you may prefer the voice of fellow neckbeard shutins.

We'll use VirtualBox for the install to counter some common concerns and fears:

Preparing For Your Install

Before we get started, we need a couple of things:

And with that, we're ready to go.

Hit Start on your virtual machine. 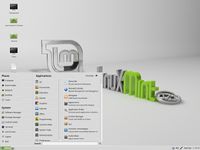 So here we are in Linux Mint. It's not installed yet - this is what's known as a Live Environment. You can do pretty much everything you want in this state, but Linux is running from it's disc (that .iso file) and RAM. Once you reboot, you'll lose any changes you make.

Let's have a quick look around:

You can now login and you'll be back at the familiar MATE Desktop we saw before. A Welcome Screen will also be there to greet you.

And that's it. You've installed Linux Mint. Add 200 experience points to your character sheet. Don't forget that your Right Control Key will release your keyboard and mouse from the virtual machine!

You may want to check out some Post Installation tasks (below), such as installing the Cinnamon, KDE and Xfce Desktops.

Dual Booting is the term used for having two operating systems installed on the same machine. When you turn on the computer a menu called a Bootloader will display, asking you which operating system you wish to boot into. This will typically timeout and select the default operating system after a number of seconds.

You can learn to dual boot within VirtualBox: 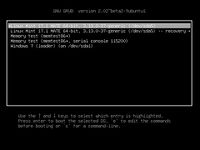 This time when the machine boots you'll see the GRUB Bootloader.

Try booting into both Windows and Linux Mint to check everything worked.

Installing on a Real Machine

If you've mastered the Mint install within a VM (and mastered dual booting in a VM if need be) then installing on your real hardware will not be a giant leap.

Differences between a virtual machine and real hardware:

If you can boot into the Linux Mint Live Environment, then you're ready to install Mint for real. In this mode you can also check whether or not you're able to access the Internet with your wireless dongle.

And that's about it. Consider yourself leveled up.

And if you've followed along this far, you now have:

All of this makes you a pretty clever anon. It's common for anons to shun praise and self deprecate and downplay their skills, but you don't need to do that today. After following along through all of this it's ok to let your ego out a little. You've come a long way.

You're probably familiar with installing software on Windows. It goes something like: 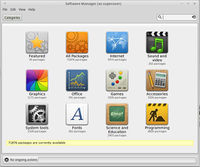 In Linux a Package Manager is used. This is a program that links to large repositories of software packages which have been built and tested to work with your distro. Important updates and security patches are already applied. The process goes something like:

If the software you want needs any extra system libraries (dependencies) these are automatically selected and installed for you. 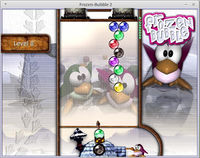 Let's test it out by installing a game:

Now is a good time to install your favourite programs. The List of recommended GNU/Linux software might help you.

Since Linux Mint comes in four different versions: Cinnamon, MATE, KDE and Xfce. We should have a look at each and see which one feels right.

A Window Manager is a process which runs many simple parts of your graphical interface:

Different Window Managers have different components and are customized in different ways, but they're all pretty lightweight - meaning that they're fast to run and don't require much RAM or HDD space. They also lack many whiz bang features.

A Desktop Environment is a Window Manager bundled with many other programs in order to provide a more bells-and-whistles Desktop. Things like:

All of these are usually designed by the same standards (i.e. similar menus, similar keyboard shortcuts, similar graphical layouts) and are integrated into each other (e.g. the sound configuration program can be opened from the media player program). This aims to make most computing tasks seem familiar, rather than being a bunch of rag-tag programs which all look and act differently.

Desktop Environments are slower to run than simple Window Managers, and require more RAM and HDD space. This is only really noticeable on old computer (or our virtual machine!).

All Desktop Environments contain their own Window Manager within them. 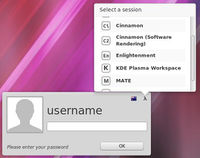 Selecting the Desktop during login 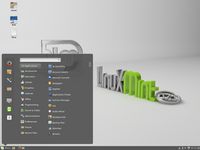 At first glance, Cinnamon is very similar to MATE. They were both forked (based on) an older program named Gnome 2.

There's an Application menu in the bottom left which is a little different to MATE's.

There's no wallpaper set! This is one of the tiny differences between Linux Mint MATE and Linux Mint Cinnamon editions. Let's fix it:

There are other differences between MATE and Cinnamon, but these are topics for other articles. The important part here is that you've changed your Desktop Environment without needing to download and install a different version of Linux Mint. 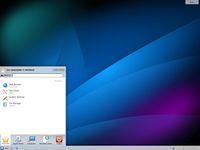 As we did when installing Cinnamon:

KDE has it's Application Menu in the bottom left. There's also a "Main" menu at the top right of screen which allows you to add widgets to the desktop. Widgets can be anything from clocks to moon phases to chemistry facts. You'll also notice little window animations and other pleasantries.

KDE also comes with many, many applications:

There is plenty to checkout with KDE.

The Software Manager can be found in the Application Menu under System. 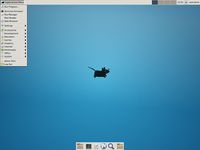 Xfce has it's Application Menu in the top left, and a few program shortcuts in the bottom center of screen, similar to Mac OSX.

Compared to KDE, Xfce starts up much quicker and feels faster. It comes with a couple of programs - most notable being it's file manager. You'll notice that all the KDE applications we installed earlier are accessable even though we're not in KDE.

The Software Manager is located in the Applications Menu under System.

Besides the four Desktops that Linux Mint offers as defaults, there are heaps of others to checkout:

After looking into all these different Desktops there are a couple of things worth noting: