DELETION CANDIDATE
Relevant discussion may be found on the talk page. Reason: Most of the major Linux distros have been covered in GNU/Linux and the Babbies First Linux

0linux is a French Linux distribution built from scratch. Designed mainly for French-speaking and moderately technical users, 0Linux provides a minimalist installation CD, a text-mode installer program, and over 1,400 packages in its online repository. 0Linux uses custom package management commands for installing (spackadd) and removing (spackrm) the distribution's *.spack packages and a separate utility (0g) for installing a group of packages and their dependences with one command. 0Linux also includes a number of home-made tools, all starting with a "0" (e.g. 0bureau for choosing the preferred desktop environment), to configure various aspects of the system.[1]

Absolute Linux is a light-weight modification of Slackware Linux. It includes several utilities that make configuration and maintenance easier and it has many common desktop and Internet applications installed and configured with tight integration of menus, applications and MIME types. Absolute Linux uses IceWM and ROX for its window and file managers.[4]

Alpine Linux is a community developed operating system designed for x86 routers, firewalls, VPNs, VoIP boxes and servers. It was designed with security in mind; it has proactive security features like PaX and SSP that prevent security holes in the software to be exploited. The C library used is musl and the base tools are all in BusyBox. Those are normally found in embedded systems and are smaller than the tools found in GNU/Linux systems. [5] 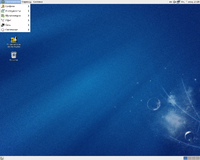 ALT Linux was founded in 2001 by a merge of two large Russian free software projects. By the year 2008 it became a large organization developing and deploying free software, writing documentation and technical literature, supporting users, and developing custom products. ALT Linux produces different types of distributions for various purposes. There are desktop distributions for home and office computers and for corporate servers, universal distributions that include a wide variety of development tools and documentation, certified products, distributions specialized for educational institutions, and distributions for low-powered computers. ALT Linux has its own development infrastructure and repository called Sisyphus, which provides the base for all the different editions of ALT Linux.[6]

antiX is a fast, lightweight and easy-to-install Linux live CD distribution based on Debian's "Testing" branch for x86 compatible systems. antiX offers users the "antiX Magic" in an environment suitable for old computers. The goal of antiX is to provide a light, but fully functional and flexible free operating system for both newcomers and experienced users of Linux. It should run on most computers, ranging from 64 MB old PII 266 systems with pre-configured 128 MB swap to the latest powerful boxes. 128 MB RAM is recommended minimum for antiX. The installer needs minimum 2.2 GB hard disk size. antiX can also be used as a fast-booting rescue CD. A special Xfce edition made in collaboration with the MEPIS Community called MX-14 "Symbiosis" is also available.[7] 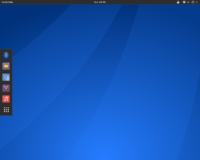 Antergos is a modern, elegant and powerful operating system based on Arch Linux. It started life under the name of Cinnarch, combining the Cinnamon desktop with the Arch Linux distribution, but the project has moved on from its original goals and now offers a choice of several desktops, including GNOME 3 (default), Cinnamon, Razor-qt and Xfce. Antergos also provides its own graphical installation program. [8]

APODIO is a Linux live and installation DVD with a large collection of open source audio and video software, as well as graphical utilities for making system administration as simple and intuitive as possible. It is based on Ubuntu. [9] 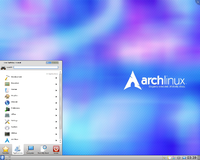 Arch Linux is an independently developed, i686- and x86_64-optimised Linux distribution targeted at competent Linux users. It uses 'pacman', its home-grown package manager, to provide updates to the latest software applications with full dependency tracking. Operating on a rolling release system, Arch can be installed from a CD image or via an FTP server. The default install provides a solid base that enables users to create a custom installation. In addition, the Arch Build System (ABS) provides a way to easily build new packages, modify the configuration of stock packages, and share these packages with other users via the Arch Linux user repository. [10]

ArchBang Linux is a lightweight distribution based on Arch Linux. Using the Openbox window manager, it is fast, up-to-date and suitable for both desktop and portable systems. [11] 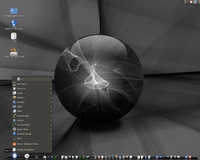 ArtistX is a Ubuntu-based bootable DVD containing many free multimedia software packages for audio, 2D and 3D graphics, and video production. The goal of this project is to showcase the variety of multimedia software available on the GNU/Linux platform and to enable creative individuals to accomplish their tasks with the help of Free Software. [12]

Formerly Medialinux: Ubuntu-based bootable DVD containing many free multimedia software packages for audio, 2D and 3D graphics, and video production. The goal of this project is to showcase the variety of multimedia software available on the GNU/Linux platform and to enable creative individuals to accomplish their tasks with the help of Free Software.

A product sponsored by the Free Software Foundation, gNewSense is based on Debian Stable and is released without any proprietary and non-free components, and several "enhancements". Notably, all proprietary firmware, restricted modules and Debian logos are removed. The goal of the project is to produce a totally free ("libre") Linux distribution. Prepare to cry when no drivers are available for your 1337 gamin' rig.

Based on Debian Stable. It's designed to run Valve's Steam and Steam games. It comes with GNOME and features various third-party drivers and updated graphics stack. Also has a long-term support kernel and a custom graphics compositor designed to provide a seamless transition between Steam, its games, and the SteamOS system overlay. The base operating system is open-source software, but the Steam client is proprietary.