For a more complete collection of terminal applications, be sure to check the GNU/Linux applications page. 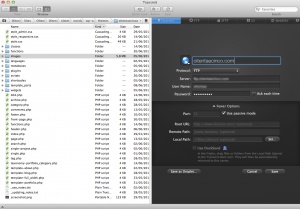 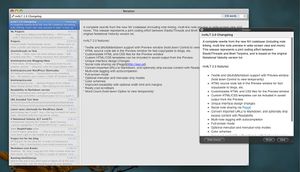 nvALT has a customizable interface. 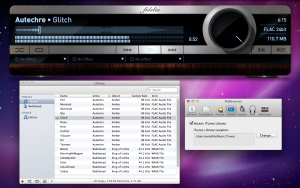 While expensive, Fidelia offers a lot of extra options and features for audiophiles.

Kodi (former XBMC) is a free and open source GPL software media center featuring a 10-foot user interface for use with televisions and remote controls. It is highly customizable via skins and addons. There are even addons available for streaming from internet services like YouTube and Twitch.tv. It plays nearly every video and music format out of the box. The built in scrapers can pull data from sites like IMDB and thetvdb to allow sorting media by actor, genre, rating, etc. It can export this data to local files for offline use.

Plex is a fork of the former XBMC (now Kodi). It has separate front-end (player) and back-end (server) components. Plex Media Server, unlike the free frontend, is a combination of free and proprietary software, with the majority of the code being proprietary. It has many of the same features as Kodi, but focuses more on its web interface. It also excels at on the fly video transcoding to allow playback over slow connections.

Handbrake is a free and open source video transcoder with an easy to use GUI. It can rip and convert a variety of video formats, but can not break DVD or Blu-ray copyright protection.

MKVToolNix is a set of FOSS tools by Moritz Bunkus for working with Matroska files. It can mux, split and merge mkv files with no transcoding or loss of quality. It can also add or remove audio and subtitle tracks, change track order and edit metadata.

Audacity is an easy-to-use, multi-track audio editor and recorder. It has support for LADSPA, Nyquist, VST, Audio Unit effect and VAMP analysis plug-ins.

XLD is the preferred Mac audio disc ripper of what.cd. It can output cue sheets and log files via a plugin. It also supports tagging with MusicBrainz and FreeDB.

Safari is the default web browser in Apple's Mac OS X. It is based on Apple's Webkit layout engine, a KHTML fork.

Firefox is free software developed by Mozilla. It is highly extensible via addons and included as the default browser in many Linux distributions. It is often criticized on /g/ and /tech/ as "SJWfox" because of some Mozilla developers outspoken campaigns on social and political issues.

QupZilla is a FOSS web browser, built on the Qt and QtWebEngine (based on Chromium's rendering engine) frameworks. It supports extensions, ships out of the box with AdBlock, Mouse Gestures, GreaseMonkey, Speed Dial, Click2Flash, and more. It provides seamless integration with most desktop environments, and has several other distinguishing features. QupZilla is licensed under GPLv3.

Opera is a proprietary web browser that has pioneered open web standards for over two decades. It is notable for being the first web browser to sport a tabbed interface. It is developed and maintained by Opera Software.

Chromium is the developer version of Google Chrome. Its tracking features can be easily disabled. Although it is free and open source software, its code is not as well audited as Firefox.

Otter Browser is a FOSS web browser that aims to recreate the best aspects of the classic Opera (12.x) UI using Qt5.

SeaMonkey is a continuation of the Mozilla suite. Unlike most modern web browsers, it is an Internet suite, complete with bundled programs for email, IRC, and web design. It is compatible with most Firefox add-ons.

Tor Browser (formerly known as Tor Browser Bundle) is a package of a modified Firefox extended support release, NoScript, HTTPS-Everywhere, Tor, TorButton and TorLauncher. It automatically routes traffic through the Tor network and deletes history and cookies when closed.

HexChat is a popular replacement for the XChat IRC client, a client which offered a free binary for Linux but charges money for the Windows version. HexChat is a continuation of XChat and makes both its source code and binaries available to users of all platforms it's created for. Like its parent software, HexChat is licensed under the GNU GPL. It includes all the basic features one would need, and can be ideal both for new users and IRC veterans. 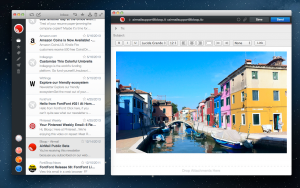