CLEANUP CANDIDATE
Relevant discussion may be found on the talk page. Reason: retarded, outdated, ascribes shit to Bill Gates rather than Microsoft the company

Microsoft, also known as Micro$oft is the company responsible for the Windows operating system and the browser that held the internet back for oh so many years. It also made the Xbox line of consoles as well as a bunch of tablet computers. They bought Nokia, just like Google bought Motorola.

The company is trying hard to reform because it knows it's pretty much lost the battle against the web, open source and free software. Operating systems simply don't matter anymore. While there is a deep history to this, it is visibly evidenced by how they gave up trying to hold users back with a shitty browser and how they're stepping up on the operating system game and spreading to phones and tablets because mobile platforms are on the rise and OS X and GNU/Linux are gaining popularity on the desktop.

Despite being inferior, it was MS-DOS itself that gave Microsoft great initial momentum: by being based on it, they were able to enjoy its software selection. Microsoft had delved into Unix lands at the time, but it was for this reason that DOS was chosen. Eventually, they created Windows, a graphical extension to MS-DOS, which was pretty successful, again partly due to backwards compatibility, which would remain a core concern even as the operating system moved on to 32 bit architectures. The eternal struggle to keep old software working was one of the few positive qualities Microsoft had until very recently, where they decided it was ok to change and deprecate things in favor of shiny new technology. Losing that aspect has cost them dearly, since it meant alienating old customers when new, viable alternatives were surfacing.

Microsoft then came up with Office, a set of applications designed for office tasks such as text processing, spreadsheet handling and presentation creation. It was their killer app, and locked entire companies into using Microsoft products, guaranteeing Windows sales. No other application would go on to have the same impact or relevance to the Windows platform as Office did. The only one that came close was their browser, Internet Explorer. It was deliberately broken in order to keep web developers from building web sites that worked everywhere. It held the web back for so long, it still deserves to die even though it's a pretty competent browser in current times.

Windows Vista made people mad, and so did Windows 8. Unfortunately for them, the web was gaining tremendous popularity as a platform at the time. Since Microsoft forgot all about backwards compatibility and would keep pushing out dozens of new APIs for everything all the time, developers felt it wasn't a safe platform to develop on. Who wants to use technologies that will be obsolete soon enough? They quickly switched to the web. Mobile platforms also stole quite a bit of market share. GNU/Linux enjoyed modest gains, but nothing too special.

That's when the desktop ship started sinking. Since Microsoft had bet all its money on that, it was in an incredibly bad position. Companies like Google and Apple already had a huge head start on the web and mobile markets, respectively. Though they've seen the light at this point, they still haven't fully caught up with them, but they're surviving.

Once they realized the current was too strong, Microsoft stopped trying too hard and started at least trying to playing nice with others. They removed all the broken shit from their browser and made it comply with web standards in a sensible manner, even going as far as publicly moving to get rid of previous versions because the company itself admits they're shit. Windows 7 was a great operating system that fixed pretty much all the issues with Vista. Windows 8 was an improvement in many ways, but was a massive blunder in the sense it tried to force a tablet user interface on desktop users. 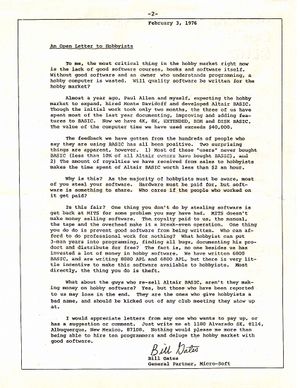 "An Open Letter to Hobbyists" by Bill Gates

Bill Gates was a member of The Homebrew Computer club along with many other individuals. He was the outcast, like the weird man who stands in the side of the room at the party. He created Altair Basic, for the Altair system. This was a very simple feat as after he created this BASIC interpreter, it was easily copied by everyone else at the club. This was normal behavior for the club. However, Bill Gates thought that this was terrible so he wrote "An Open Letter to Hobbyists" (picture on the right). he was rightfully lampooned by fellow member Steve Jobs, and was kicked out of the club. The letter yells at his fellow hobbyists for "Stealing" his interpreter. It was later discovered that he was developing it on a loaned computer from Harvard University. This meant he was charging for software he developed on Taxpayer Money.

Altair Basic seems to be the only thing Bill Gates invented. After this, he bought a version of CP/M and turned it into MS-DOS, he ripped-off Apple Finder to make Windows 1, he took the FLOSS-Licensed TCP/IP Stack from BSD and used it in Windows NT.

Nothing Microsoft has ever made since Altair Basic was their own product. They bought a bunch of bullshit, fucked it over, and let it to rot. Internet Explorer was once Spyglass Explorer, which itself was a fork of Mosaic. The only thing you can credit Bill Gates with inventing is Altair Basic; and yet, Bill Gates is hailed as a King of Computers. This is the level of technological ineptness the common man has.

Bill Gates can be (mostly) blamed for the technological ineptness too. Bill Gates is responsible for selling on special deals "educational" aides including computers, posters, and textbooks to public schools. These educational aides have insane ramblings of Microsoft Propaganda such as saying "Before, most people used DOS. DOS had no graphic interface. Thanks to Microsoft, we now have Graphic Interfaces that are point and click."

They have no shame.