Difference between revisions of "Software-defined radio" 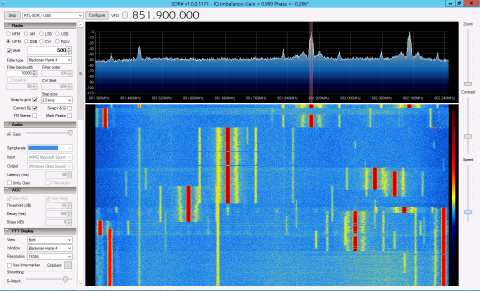 Software defined radio is the means of listening to radio waves using the combination of low level hardware, and software processing. While non-SDR techniques use physical hardware to demodulate FM and AM, In SDR raw data from the receiver gets sent into the USB port, and software is used to control the modulation. The only drawbacks of SDR are bandwidth constraints and processing. Since uncompressed unmodulated data is coming through a PC interface (USB mostly), a high speed connection and a computer with decent specs is required. A Single RTL-SDR May use up to 3.4MB/sec of USB bandwidth. CPU usage varies on the tuner software you use. Using software defined radio opposed to regular radio gives you the ability to see signals you would normally only hear. Your eyes can cover a very wide bandwidth of signals on a computer screen, while your ears can only comprehend a single spoken conversation at a time.

If you wish to experiment with SDRs before you build your own receiving station, you may be interested in the WebSDR project.

SDRs come in many shapes in sizes, from the $8 RTL-SDR to $2000 USRP(with daughterboards) There are also many SDR's such as the HackRF, USRP, FunCube, etc. When you buy an SDR, you get what you pay for. More expensive SDR's are purpose built for transmitting, and can handle things such as GSM spoofing, where an unencrypted GSM tower can be simulated to capture SMS in a cleartext fashion. 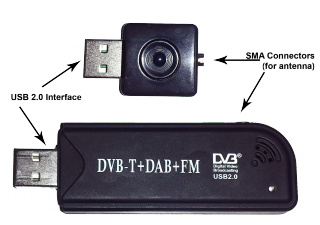 A great beginner SDR is the RTL-SDR It features a receive frequency range of 25-1700MHz, 2.048MHz bandwidth and is priced low enough that beginners can see whether radio is a hobby they want to get into(R820T model).

RTL-SDRs come with various tuner chips, the most widely used tuner is the R820T, with the E4000 coming in a close second. The E4000 is a discontinued model and is usually priced higher than R820T models. R820T tuners are generally better for reception of trunked radio systems (digital police radio).

The RTLSDR began its life as a DVB-T OTA TV tuner (a tv tuner for europe). China began bulk manufacturing these TV tuners for the european market. It was later found that a hacked driver could be installed that let the user use the dongle as an SDR.

There is a minor update of RTLSDR named R820T2, which is still compatible with the old one and improve performances of reception. [1]

As part of AMSAT-UK’s FUNcube satellite project, the FUNcube Dongle is the “ground segment”, or a radio receiver designed to allow anyone to try their hand at reception of satellites like FUNcube anywhere on Earth as part of a global educational collaboration project collecting information from space. The original has a frequency range of 64MHz to 1.7GHz. The Pro + has a frequency range of 150kHz to 240 MHz and 420MHz to 1.9GHz.

The HackRF is a DARPA funded project, it aims to provide innovation and research in the SDR field. It's much more powerful than the RTL-SDR, much more sensitive, covers a greater frequency range. The HackRF starts at $300, has both RX and TX functionality from 30 MHz to 6 GHz, bandwidth of 20MHz. During DARPA funding, beta units, the HackRF Jawbreaker were given to hundreds of testers for free. The production version was funded through KickStarter. The campaign was successfully funded on September 4th 2013 and is currently available for purchase

Transmitting
TX functionality on the HackRF is limited in power because RF theory says you must have an antenna length that corresponds to the wavelength you are sending. For example sending 5Watts over the wrong size antenna will cause a buildup of standing waves, and may fry the transmitter. To prevent this, the antenna build into the breadboard of the HackRF is only designed for ultra low power, good enough for experimentation, but not for serious broadcasting.

SDR's have endless possibilities. Because all demodulation is done in software, no new hardware is needed to decode, for example, a new digital voice mode. All the programmer has to do is write code to convert the raw samples from USB to the correct format data.

Some frequencies are used by only one type of modulation. For example 88-108 is broadcast FM, the modulation used is WFM. Using the correct modulation can help you decide what type of signals you are listening to. The table below lists the most common modulations.

The radio spectrum of frequencies is divided into bands with conventional names designated by the International Telecommunications Union (ITU):

Getting Started with RTLSDR

RTLSDR is a project made by a Finn. After discovering that the common Realtek TV-Tuner for sale to receive broadcast television on the computer is simply a complex SDR, a project was started to create a simple hack that made it able to work as a fully defined SDR with a wide-range of frequencies. You can find many RTLSDR boards for sale. Keep in mind that these are lower-end and often will not have the ability to transieve, and only receive.

AM was once the most common bandwidth for consumer radio. In the early 1980's, FM took the world by storm due to its higher quality. For you, this is what you need to know.

AM requires more power to receive, but less power to transmit. It also uses a higher frequency-range than FM. FM is low-power and higher quality audio. AM is wholly analog, while FM has the ability to support Digital Audio. This is due to AM having a lower bandwidth, while FM having a higher bandwidth.

If you tune your conventional radio, you can find the type of quality on AM is significantly poorer than those on FM, even if the station is nearby.

If you want far range, then AM is your go-to as it can be received and heard even through static. If quality of audio is what you want, while not worrying about distance, then FM is what you want.

There are two new modes of AM you may discover, one being LSB and the other being USB. Many ham broadcasters have begun using these modes as they require less power. In LSB mode (short for Lower Side-Band) the signal is halved and the signal broadcasts on only the first-half of the wave. The second, Upper Side-Band, broadcasts on (you guessed it) the second-half of the band. You can still receive these signals in regular AM mode but it may sound garbled without proper fine-tuning. 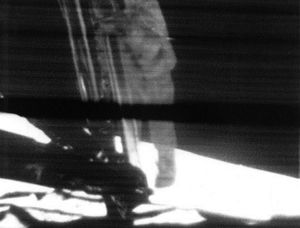 An example of a SSTV broadcast, the Apollo 11 Lunar Module

Slow-Scan Television (or SSTV) is a method of television reception that ham radio users use to share single images. The images are encoded in one of several formats, which are broadcast as audio to a transcoder. The International Space Station transmits SSTV broadcasts on a monthly basis. It was also used on the Apollo 11 mission to send early images back to Earth (if you believe it happened). SSTV is most commonly used to transmit QSL cards identifying the station. 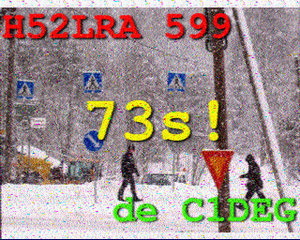 You may be interested in sending and receiving SSTV broadcasts. They are allowed on all frequencies except CW-Only. The currently standardized encoding formats are AVT, Martin, Robot, and Scottie, all having differing picture qualities. Modern SSTV software has decoding software for all.

An upconverter is required to listen to these frequencies. Shortwave bounces off the Ionosphere and has the ability to be internationally received with minimal difficulty. Shortwave includes the whole of the HF band (3-30MHz), and generally extends from 1.7–30 MHz (176.3–10.0 m); from the high end of the medium frequency band (MF) just above the mediumwave AM broadcast band, to the end of the HF band. Some commercial services, such as the BBC, broadcast on Shortwave. The NVS Time Signal is also broadcast on this band. Some frequencies follow:

Citizen Band was once the most common form of non-licensed communication between persons (thanks to the film Smokey and the Bandit), but its own popularity led to its demise as the more people on it, the more congested it became. It is primarily used by Truckers and Taxi-Drivers now, but that doesn't stop you from using it! The FCC Rules state that you are supposed to announce yourself as K-Your first and last initial, followed by your zipcode (example: K-RMS-74629) but no one in the history of CB radio followed these rules. Rather, they chose to use nicknames such as "Rubberduck".

Citizens Band is not considered true Ham Radio, and other radio amateurs laugh at persons who use CB exclusively. CB has support for AM (old-style) as well as SSB and LSB modes (New-Style).

Upconverters allow you to listen to HF bands with a converter box and your existing RTL hardware. Normally this wouldn't be possible because the lower limit of an RTL-SDR is 24MHz. This allows you to receive AM, mediumwave, longwave, CB, and shortwave radio on the cheap.

Upconverters essentially resample everything from 0-50MHz, and retransmit it, using low power, at 100-150MHz.

So for example, if you wanted to listen to a channel at 7MHz, and your offset is +100MHz, you would tune your SDR to 107Mz to listen to it. This math calculation is made easier by the offset feature found in many different types of SDR software. So once you set your offset in the program you are using, you don't need to think about adding 100MHz.

Radio signals on HF are very small, so although 0-50Mz doesn't sound like it would have lots of signals and stations inside it, they contain a majority of advanced ham radio operators, worldwide news networks including North Korea and Russia, as well as stations like the buzzer(UVB-76)

Software is available for Windows, GNU/Linux and OSX.

SDR Software (The stuff you listen with)

The WebSDR project allows ham radio operators to put their station on the internet and allow persons to tune the radio and receive what the host-station can receive. Different stations have different receiving capabilities, so not all WebSDR websites have the same capabilities. It is an international project. You can find more information, as well as the list of participating WebSDRs here.

FCC website, every RF transmitter registered registered with the FCC resides in this database