The Church of the SubGenius 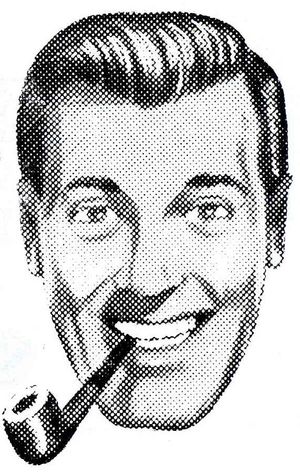 J.R. "Bob" Dobbs, High Epopt of the Church of the SubGenius"

The Church of the SubGenius (also known as The SubGenius Foundation, Inc.) is a satire religion created in the mid to late 1970's on an MIT-hosted BBS server. In the computer technology realm, The Church of the SubGenius had varying influences in the development of Slackware and Atari products. The religion is centered around J.R. "Bob" Dobbs, the world's most successful salesman (he made his first million at age 6, by accident), who in 1953 was contacted by Jehovah-1 (an invisible, undetectable space monster who has lived behind the Moon for the past 5000 years and controlled humanity according to his mysterious and sinister will) while attempting to fix a home-made television set of his design in a thunderstorm. "Bob" was told of a prophecy, known to the SubGenii as "Revelation X", whereby on X-Day (July 5, 1998), at exactly 7 a.m. (local time), aliens from Planet X (the X-ists) will descend to Earth and destroy humanity in a nuclear holocaust. Only ordained members of the Church will receive salvation - they will ascend to the X-ist mothership full of alien sex goddesses and be whisked away to start a new race of genetically superior supermen on a faraway planet. Ordination is available to anyone willing to pay a one-time fee (currently $35), and comes with a kit containing artwork, pamphlets, subversive stickers, and most importantly, an official membership card. The Church makes no effort to deny that it is a profit vehicle. It boasts about being the only religion proud to pay its taxes, and "Bob" himself allegedly told L. Ron Hubbard that starting a religion for gullible idiots was a great way to make loads of money. Those who claim to be into the Church but have not paid for ordination, even if they have bought books or other merchandise, are derisively known as "Bobbies", and will be condemned to the purgatory of ruling over the fractured remnants of humanity after the nuclear armageddon of X-Day.

The SubGenii consider themselves genetically superior mutants, a wholly separate species of homonid known as H. correctus, commonly known as the Yeti. Secret Church teaching trace the roots of the Yeti tens of thousands of years into the past, when, in the days of Atlantic, they were responsible for creating the human race, which turned out to be their biggest mistake. The SubGenius live in a constant struggle with The Conspiracy of the Normals, who control the Pink Boys and false prophets to keep humanity oppressed with things like jobs, governments, social conformity, and manipulation of the calendar to confuse SubGenii about the actual date of X-Day. By following the teachings of "Bob", the SubGenius can achieve Slack, a state of transcendent bliss that allows them to rise above the confines of The Conspiracy, become attractive overnight, have sex with real girls, become fabulously wealthy, and enjoy a carefree existence in general. The most direct way to do this is outlined in the SubGenius motto (one of many): "Repent! Quit your job! Slack off!".

Sadly, "Bob" was assassinated during a rare public appearance in 1984, but to the SubGenii he is a Living Slack Master and continues to guide his loyal followers and grant them the Slack they must have. He is survived by his first (and still his primary) wife, Constance "Connie" Marsh Dobbs, known within the Church as the Blessed Anti-Virgin. There are rumors that "Bob" faked his own death and escaped to Dobbstown, a compound hidden in the jungles of Malaysia, where he and the inner-most circle of Church elders live in a state of complete Slack and commit unspeakable acts with local young boys. 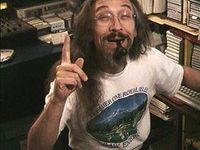 The Church of the SubGenius rose to underground prominence during the 1980s, both online through Usenet and BBSes, and IRL, where it fed off the zine and anarchopunk/DIY counter-culture of the Reagan era. The Church attracted prominent figures as Mark Mothersbaugh (of Devo), David Byrne (Talking Heads), "Dr. Hal" Robbins (voice actor who appeared in Half-Life and DotA), and Pee Wee Herman, who kept an image of "Bob" on the set of Pee Wee's Playhouse. (Stephen Colbert is suspected by many to be a SubGenius, due to the striking physical resemblance of his conservative talk show character to "Bob" and secret SubGenius messages allegedly hidden in his performances.) Members engaged in the practice of creating and sending absurd and often obscene art to each other and random strangers ("High Weirdness By Mail"), much of which is archived on their official site. Rev. Ivan Stang, filmmaker, video editor, stop-motion animator, and long-time leader of the Church is responsible for most of the audio/visual content, including a 60-second spot ordered by MTV in 1991. Since 1985, he produces a weekly radio show ("The Hour of Slack"), which features music and sound collages sent in by listeners, sermons from recent devivals, and the dissociated ramblings of old potheads.

Followers of the religion rarely "break character" to reveal it as a satire, causing many to believe that everything about the Church and its history is meant to be taken seriously. This is more or less the point of the group, causing confusion and disorder in a manner that can be called Culture Jamming.