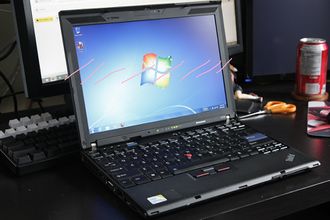 Where Macs are hipster Facebook machines, ThinkPads are virgin 4chan machines. The anti-Macbook, ugly by conventional standards, their utilitarian bentobox design appeals to business and enterprise users alike. The ThinkPad is the the laptop of choice for /g/entlemen neckbeards, and for good reason. Current model ThinkPads are deployed for use in enterprise, schools, and other organizations. As they get older, they are routinely sold at a loss by companies looking to modernize their equipment. ThinkPads are built with an internal magnesium skeletons to prevent structural compromise and data loss in case of severe damage. Used ThinkPads are widely revered by computer hobbyists and enthusiasts due to their abundance of cheap, aftermarket replacement parts, and their stellar compatibility with GNU/Linux distributions. They can also be obtained for dirt cheap, a reasonably equipped model 4 year old ThinkPad can be had for less than USD $150.

"New" refers to machines that have a Chiclet keyboard and are manufactured by Lenovo in China. They're generally better than most other laptops at the market, but many people on /g/ are divided on them being worth the price or being good at all.

Generally if you're going to buy new, you're going to want to just go direct from Lenovo. Also, by our definition of New and Used here, you can get a "New" ThinkPad off the Lenovo US Outlet, which is a Lenovo in house marketplace for refurbished ThinkPads which retain a full warranty. There are also Lenovo affiliate programs you may be eligible for through your job or school that can reduce the price of a new ThinkPad by 15–30 %. This is, of course, in addition to sites like Ebay, Craigslist, etc.

As noted above, when you buy direct from Lenovo you will be able to customize your machine. You must do this if you want to maximize GNU/Linux compatibility. Ensure you get the Intel WiFi NIC instead of the generic one. Something to bear in mind is that you'll have to deal with UEFI (see: Backdoored) BIOS chips. Also, the NSA will no doubt about it spy on you if you don't install GNU/Linux. 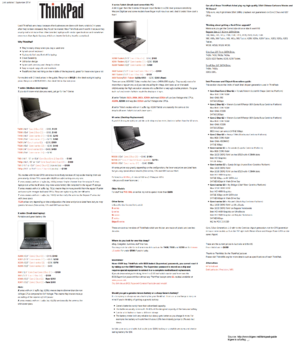 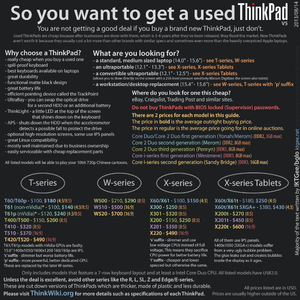 "Used" refers to machines that were produced by either IBM or Lenovo before Lenovo's introduction of Chiclet keyboards.

Ensure that Computrace isn't enabled. Some ThinkPads priced low for a quick sale have Computrace enabled, which usually means it was pulled from a functional office environment and wasn't decommissioned for liquidation, i.e. stolen. You run the risk of the ThinkPad being disabled remotely. Computrace makes it's presence known on startup, after the BIOS splash screen displays. Computrace options are located in the BIOS, so it is very likely that the BIOS will also be locked. To prevent the likelihood of buying stolen hardware, always buy from established sellers who sell many of the same models. Avoid one-off sales from indivduals, especially if they do not provide a BIOS screenshot and their sale price is suspiciously low.

Search here for details about any model you're looking to purchase. Also any information in general about ThinkPads really.