Difference between revisions of "Toughbooks" 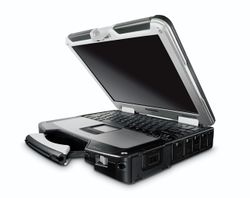 Panasonic's line of tank-like laptops. Started in 1996 with the CF-25, and as of today Panasonic still makes them. They're used by the US military in active duty.

2006: CF-30, first Toughbook to have a 1000 nit screen, even more sunlight readable than anything else before.

What to look for

First: DO NOT BUY ANY TOUGHBOOK WITH A BIOS PASSWORD! You CANNOT reset them in any way unlike ThinkPads! Same story with ones that haven't got a internal WLAN card in it, they are Federal models 90% of the time which have the WLAN slot BIOS restricted and you can't run a WLAN card in one, they will NOT work. Trust me, I had a Federal Model CF-18 Mk4 once and I never got internal WLAN to work because of the BIOS restriction.

Second: Try not to buy from a business seller, they tend to ask a LOT more than private sellers.

Yet, caddies from all generations of CF-19's are interchangeable, as they are all SATA. I (Kutgebruiker9000) am running a CF-19 Mk1 caddy in a CF-19 Mk5, the newer (Mk4 and up) caddy has a plastic casing and it sucks to take apart. The older ones are fully made from stainless steel and are held in place by two screws.

The CF-30 and 31 caddies are also interchangable as far I know, gotta do more research on that subject.

Older models, like the CF-18 and 29 tend to have broken/non working touchscreens, because of delamination, the Mk1 CF-19 had this too sadly.

Port covers from China are shit, get original Panasonic ones if you want waterproofness, the Chinese ones don't keep out the water and you will ruin your Toughbook when you get caught in a rainstorm that way.

Same story with batteries, Chinese/clone batteries and chargers for Toughbooks are shit and should be avoided. Need a cheap charger? Use a IBM 72 watt adapter from a older ThinkPad, like a T40. They also have newer ones with a built in car/12v cigarette lighter socket cable.

As for buying: eBay, Craigslist, and if you like rulefaggots: Notebookreview's Panasonic forum, careful though: mention BIOS and password in one sentence and the mods/99% of the users there will sperg the fuck out.

Slightly better is Toughbooktalk, they allow BIOS password discussion but the owner is a huge faggot, and the atmosphere of that forum is circlejerky. Also, the owner doxed a user once (for selling overpriced shit, apex kek), tread with caution.

A good site for info about all sorts of rugged computers is www.ruggedpcreview.com, it's been here for a while and is still being updated.

To decode a modern Toughbook serial number, use this: http://www.panasonic.com/business/toughbook/order-toughbook-computers.asp

So, you came to the conclusion you want a Toughbook? That's cool, what model do you want?

If portability is a issue: CF-19 Mk2, it has a Jewtel U7500 CPU with 64 bits capability, and a pretty good battery life.

Extreme portability and speed is no issue? CF-U1 Mk1 or 2, a rugged UMPC.