Difference between revisions of "VirtualBox"

VirtualBox is a FOSS virtualization system for Windows, OSX and GNU/Linux.

With it you can create a Virtual Machine, essentially having a "fake" computer running inside your actual computer. Your physical computer is termed the Host machine, and the virtual machines are known as Guests.

It is possible to "snapshot" a virtual machine, allowing you to save and restore it's current state just as you can in a video game emulator or word processor.

You can run multiple virtual machines at once and even network them together.

Official installers can be found on the VirtualBox Downloads page.

During installation you may need to approve some VirtualBox drivers owned by Oracle. These are fine: go ahead and agree. You may also need to reboot after the install.

Once installed, shortcuts will be available in the Start Menu.

Your official package repositories will very likely contain VirtualBox. There may also be a separate package for the VirtualBox Guest Additions iso, which is handy to have if you're going to be creating Windows Guest machines.

After you install the package(s) you may need to load the vboxdrv kernel module ($ sudo modprobe vboxdrv) or add your user account to a virtual box users group. Refer to your distro's wiki for details.

Once installed, running "VirtualBox" (capitals required) from the command line or checking your Desktop Environment/Window Managers application menu will get you started.

There are two steps in creating a usable virtual machine:

In this example we'll just be covering the setup of the machine and stop just short of installing the OS (Windows 7 and Linux Mint cover these topics). 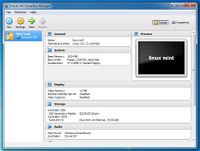 Creating a Virtual Machine is done using a wizard in the VirtualBox Manager:

Now you'll be back in the VirtualBox Manager and your new virtual machine will be over on the left hand side and it's details will be displayed.

Before you power it on, you may want to put your operating system install .iso in it's Guest optical drive. You'll also want to know how to uncapture the mouse and keyboard from the Guest machine (hit the right Control key on your phsyical keyboard):

Inserting a Disc in the VM

With your virtual machine selected, hit the Settings icon on the toolbar, and:

You're now ready to power on your virtual machine and install your operating system.

If you're running a Guest Windows machine, you may want to install the VirtualBox Additions software within it to allow for proper fullscreen, drag and drop, shared folders and so on. You'll need to have the VirtualBox Guest Additions Iso available on the Host machine first:

With the Host prepared and your Guest running, select the Devices menu in the Guest's window and hit "Insert Guest Additions CD Image...". The Windows Guest will now see a CD with a VBoxWindowsAdditions-(x86/amd64).exe file. Run it, accept the detaults, and allow the Windows Security alerts about Oracle System Devices through. It'll want to reboot once it's done. Let it.

Beyond the basic wizard setup, there are plenty of extra options available in your virtual machine's Settings window.

Snapshots allow you to save the state of a Guest machine at a point in time and revert to it later. You can have multiple snapshots and branching versions of a Guest's history (think of Back to the Future's different timelines).

Snapshots capture both the disk and RAM status of a virtual machine. They are also pretty clever in how they store these changes to the machine, so you won't have to worry about a 25gb Guest hdd image being written multiple times to the Host.

Take a snapshot via the Machine menu in the Guest's window. Name it well.

Reverting to a Snapshot 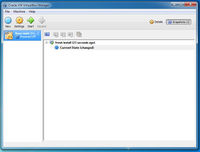 You need to have VT-x enabled in both the Guest Settings (System, Acceleration) and the host's BIOS.

Right Control + delete will send a Ctrl-Alt-Delete to the Guest. It's also available through the Machine menu in your Guest's window.