MERGE CANDIDATE
Relevant discussion may be found on the talk page. This page is a candidate to be merged with: Email

In today's privacy lax technological landscape, even e-mail providers run by the world's biggest corporations are a hair's breath away from being compromised. Although no major breaches of mail servers have been internationally publicized within the last few years, events like "the fappening" serve as a strong reminder that for every dollar spent by Apple on making their botnet confirmed phones, tablets and personal computers look like high end sex toys, about nary a cent is spent on making sure your data is secure. There are, however, many service providers who are actually committed to keeping your precious data unseen by those who were uninvited to see it.

When searching for e-mail service providers there are always a few key signs that the service should be used or avoided.

Open source
Now before you righteously shout at the top of your lungs "hurr durr freetard detected winders is the best" think about it. If an e-mail service uses open source software it is possible for anyone to review said software for backdoors and bugs that could potentially be exploited to steal your data or disrupt your workflow (simple stuff but some /g/its don't quite understand). If the software is well maintained, problems will either be quickly dealt with or not arise at all.

Physically secure
There isn't much point of having a service that is impossible to hack into if some random guy can just walk in and take your data. Although most service providers wouldn't be that stupid, there are some that probably aren't far off. Good places to have a mail server are: decommissioned bunkers, secret locations or spread out over many different machines in different locations.

Not for profit/independent
They say every bloke has his price, well, there is no arena where that statement rings more true than in big business, where back room deals are a way of life and morality and personal convictions come second to profit. You're much safer putting your precious data in the hands of some sweaty neckbeard, who does nothing but watch Alex Jones and talk about racemixing on /pol/, with a mission to "stap the gummmerment takin' our freedumbs", than some corporation who would sell you out in an instant for a few bucks.

Made by a fellow autist
If your mail provider was set up by a fellow /g/ent, /tech/ie or /cyber/cunt, you know that their hatred for governments and corporate entities burns deeper than the bed sores they more than likely possess, and wouldn't sell your data even if the NSA was knocking on their door.

Anonymous
An e-mail provider who doesn't require your details to register an account can't sell it out for some quick bucks, should someone come asking for your data specifically. This includes not requiring your name, previous e-mail address, phone number or a link to one of your social media accounts.

Privacy Features
Some email services will include additional privacy features, such as stripping your IP address from the source of the email so that anyone you send email to doesn't know where you are and can't crack into your firewall. https://www.raymond.cc/blog/hide-sender-ip-address-in-email-headers

Based in a police state
You know your data isn't safe if literally any government official or ally can simply ask to see your details and every message you've sent since record began. This means that providers based in the USA, China, Australia or any other authority cuck(tm) nations aren't a good choice if you're a whistle blower, plan to run for office, be dissentious (basically every chan user except for the most patriotic /pol/tard) or try to obtain a position of power in general. Countries like France, Germany, Sweden and perhaps Japan are safe bets.

Associated with known pedophile networks
If your mail provider is associated at all with the less scrupulous man-child side of the internet, there is a chance that your data is already being watched.

You saw it in an advertisement/a normalfag recommended it to you
This one goes without saying, spam is usually quite profitable, and spreading it to others increases this profit. If you see an ad saying "Other providers hate him. Find out how he sends emails the fastest, with one dirty trick" nope the fuck out of there immediately.

Posteo
A German email provider with Ganoo compliant JavaScript (not sure about anything else though). Has features designed to keep you anonymous and your data private such as encryption and anonymous sign-up. Requires 1 euro buck a month and runs on sustainable green technology.

cock.li
It's mail but with cocks. It's run by a /tech/ie dedicated to anonymity and used by 8chan's administrator. As of December 2015, one of cock.li's server hard drives that was being used to host the service has been seized after a bomb threat was sent to several school districts in the United States using the email [email protected] "That means that SSL keys and private keys and full mail content of all 64,500 of my users, as well as hashed passwords, registration time, and the last seven days of logs were all confiscated and now are in the hands of German authorities." It is unknown if the two incidents are related. He and a legal team are working on getting back the Hard Drives. After this, he decided to make a new cock.li which is dedicated to privacy. It is hosted on a Tor-friendly provider in Romania, where he lives. He is currently working on IMAP/SMTP over .onion, however you can easily use the clearnet addresses over a tor proxy. The privacy policy is very basic and it essentially says "Don't be a normie and encrypt your fucking emails."

Update: it was discovered via a Freedom of Information Act request that the seizure of the hard disk was due to an international order from the United States. 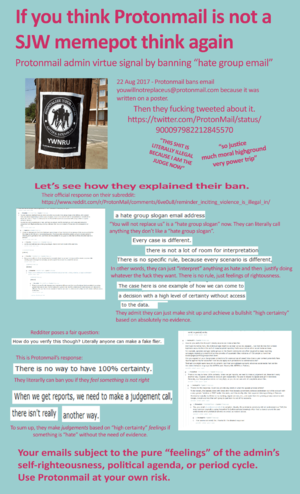 You can disable anyone's Protonmail account by putting their email onto some bullshit poster, taking a pic, then sending it to [email protected] Have fun!

Designed by some lads at MIT, maintained by CERN in an abandoned military command center deep within the Swiss alps, featuring end to end encryption, expiring emails, a dogged dedication to absolute privacy from any third party and complete anonymity including scrubbing IP addresses and dissociating them with your user name, this is the email provider to end all email providers.

Note: In November 2015 ProtonMail suffered a series of DDoS attacks. It paid a ransom for immediate relief from the first attack, but was then struck by a more powerful secondary attack. After the incident a Cryptome post accused ProtonMail of being compromised because of its new DDoS protection partnership with Israel based company Radware. They wrote an article to address this.

Teknik.io
Requires no personal information to sign up, fast, and no IP logging. Includes a web client, and can be used in any POP3 or IMAP compatible client.
At least since December 2020, Teknik no longer provides free emails to users. You must either pay Teknik $5 worth of Bitcoin or subscribe for one month at their $5 Tier on Patreon.

Tutanota
German-based email service which is open-source, with a built-in end-to-end encryption, it doesn't require any personal information.