From InstallGentoo Wiki
(Redirected from GVim)
Jump to: navigation, search

Vim (Vi IMproved) is a text editor based on the standard UNIX editor Vi. Its main feature is modal editing, which minimizes the amount of keystrokes needed for performing tasks, thus greatly reducing strain. 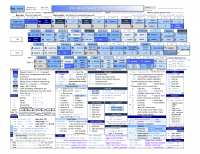 All configuration is kept in the ~/.vimrc file, ~ being your home directory. It is advisable to look up existing online vimrc's but do not just copy them. In Vim, :h each entry, read the description and decide for yourself if you want them.

Well documented base to start out with: https://github.com/timss/vimconf