From InstallGentoo Wiki
(Redirected from Plan9)
Jump to: navigation, search 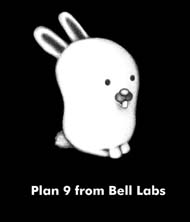 (For the popular fork, see 9front)

Plan 9 from Bell Labs is a research OS family, created at Bell Labs by many of the same people who created Unix, like Ken Thompson, Dennis Ritchie and Rob Pike. Its distinguishing features include the use of files with the 9P protocol for most, if not all resources in the operating system (including graphics), and private namespaces, where each process can have a different view of the file system. Interest in Plan 9 stems out of curiosity, admiration and idealism.

Plan 9 is fundamentally an operating system created to address the practical use of the Unix system since it left Bell Labs, especially in the commercial setting. The world had changed since the days of Research Unix, and graphics and networking had become monumentally important in the computer space. Organisations outside Bell Labs shaped the development of Unix, with the adoption of sockets from BSD and the X Window System from MIT that bent and twisted the "Unix philosophy".

The developers of Plan 9, then, set out to develop a new operating system for research, exploring areas such as distributed computing, naturally graphics and networking, and heterogenous access to system resources. While Plan 9 is not Unix, it is to an extent Unix-like, and feels rather like the later versions of Research Unix after the flight of Unix outside of Bell Labs (and even has some of the features of those later Research Unix releases).

There is a perception in the Plan 9 pommunity that it was due to the prohibitive cost and later licence confusion that Plan 9 made much ground commercially.

9front is at the forefront of Plan 9 Ontologically-Oriented Technology, including new advancements such as better hardware support, audio, wireless networking and new programs like NES, SNES, Game Boy, GBA and Genesis emulators and a paint program. If you want to run Plan 9, this is probably the way to go. Most of this article assumes you are using 9front.

Graphics is considered ubiquitous in Plan 9, and while Plan 9 features the ancient and revered Unix toolkit (awk, grep, cat), it is therefore not plausible to use without graphics.

Plan 9's graphical shell is called Rio. (How to use Rio follows shortly.) The way Plan 9 abstracts graphics hardware is through offering drawing surfaces as character files. Applications write to this file with drawing commands usually using libdraw. Rio uses the top-level surface to draw to the whole screen, and each new Rio window creates a new drawing surface, and using private namespaces, provides that surface to applications in the same way. You can test this by running a graphical program when Rio is not active, which draws to the entire screen, and by running Rio inside a Rio window.

Mouse cording is common to Rio and Acme, the development environment. Mouse Chording was first introduced in the NLX System used in The Mother of All Demos. Mouse Cording works by pressing various keys on the mouse to form a cord (like a Guitar), which produces various commands. It is simpler than the NLX version which used a binary format.

The concept of network transparency was one of the most important factors in the design of Plan 9. You should be able to feel as if your terminal and the CPU server you have just logged into are the same machine and are accessing the exact same resources, instead of being completely abstract environments as happens in Unix-like operating systems with SSH. Usually however most single Plan 9 installations are a combination of file server and terminal.

If you wanted to use Plan 9 as a server (bearing in mind that performance will be a lot worse than Linux or BSD) the closest analogue would be a file server or CPU server backed by a file server.