Apple Inc. is a hardware and software company that makes computers, operating systems and mobile devices. They are most famous for the iPhone and iPad products, but also known for their iPod music players, Macintosh computers as well as the Unix OS X and iOS operating systems. The Apple brand is more valuable than Coca-Cola.

Steve Jobs was Apple's CEO until he died in 2011. He was replaced by Tim Cock.

The company puts a strong focus on the user experience. Their products are praised for their design with reasonable attention paid to detail. Their user interfaces are easy to use, and unique. However, Apple's iOS-based platforms tend to be walled gardens; you usually can't do much more than what Apple allows you to do. Apple controls what gets into the App Store, which means the software you can install must be approved by Apple. This limitation can be circumvented, but only enthusiasts tend to jailbreak their devices, leaving the average users at the mercy of Apple's will.

Main article: OS X OS X is a very capable Unix operating system that is mostly POSIX compliant and with a nice graphical user interface on top. Software availability cannot rival that of Windows but it tends to be on par with Linux, if not higher.

The iPhone is the other mainstay of the smartphone market; in the West it's become an icon and a status symbol. The iPhone boasts high-end hardware and has great build quality. However, it was designed to be operated entirely with one hand and there aren't any options when it comes to screen size. If you like phablets, you are out of luck. It runs the iOS operating system; while its App Store contains a very large collection of high quality applications, it suffers from the walled garden problem the most. 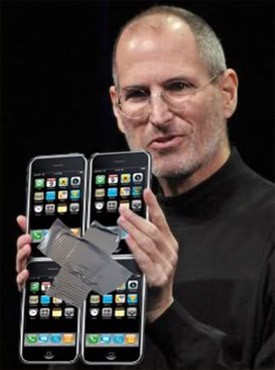 The iPad is Apple's tablet line, which popularised tablets in 2010. iPads generally have more custom built tablet software than Android but the scaling of icons and text is insane.

Apple's line of personal computers. They used to be based on a custom computer architecture, but nowadays they're pretty much exactly like PCs under the hood. They look and feel nice and have great build quality, but will most likely cost way too much money for the hardware you will be getting; the exception being the Mac Pro (dubbed the trashcan) which is cheaper than DIY PCs (wrong as of forever) and, surprisingly, can be upgraded.

Steve Jobs was fired from his own company in the mid-1990's. After developing NextStep, he was eventually rehired to Apple as they had recently overcome bankruptcy. There is a conspiracy theory that claims that after Steve was rehired, he attempted to kill his own company by making insanely stupid shit. The NextStep failed, the consumer market was being bastardized, he was rehired from a company that screwed him over. What he didn't realize was that the general population had become so stupid that his stupid ideas were actually being bought.

Is it true? Decide for yourself.