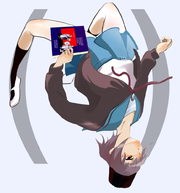 The Daily Programming Thread is a general on /g/ that is anything but daily. In it, people discuss programming, ask questions and share their code and personal projects. It is usually started with a picture of an anime girl upside down.

Much of /dpt/ consists in people wondering what to work on. To address this need, various anons created rolling images with various challenges (which can be found below). Then some anon made a webapp for automatic rolling, but he did a half-assed shitty job of it, so another anon made a proper roller.

The DPT goes through ups and downs, directly correlated with the time people are on and off of school or vacation. Periods of notable influx of students is recognized by regulars as a sharp drop in the quality of discussion and is often referred to as "summer".

Several people in the DPT chose to adopt names and tripcodes. Johnson is a notable person, with an 80s hacker personality. Marisa is creating his own operating system. They eventually created an IRC channel for themselves, though DPT users sometimes show up.

There appears to be one dedicated troll that lingers on the DPT, often referred to as the "Python troll". According to his own words, he's "there all year". He would often pester people who use other languages, touting the advantages of Python, and would create Daily Programming Threads that implied Python was the preferred language of everyone. Ruby users were the most susceptible to his trolling. He'd post "Zen of Python" images, which would present Python's design philosophies, and then immediately follow up with a "Zen of Ruby" image, which was the opposite of the Python one and made it look bad.

His relentless trolling resulted in a stigma around other Python users for a while. He participated in, and orchestrated, many Image Wars.

The /g/ userbase intersects with /a/, and people frequently post images related to anime on the board. A high variety of content not directly related to technology is posted, among which one can find shaved legs and anime lolicon girls, the latter leading to the coining of the term "techloligy".

Some people in the DPT would get annoyed by these posters, openly dismissing the pictures as irrelevant to the topic and telling the posters to leave. This would invariably lead to a retaliatory picture dumping, ending all relevant discussion in the thread. Needless to say, this tactic was heavily exploited by trolls.

Until relatively recent times, Yuki was the only anime girl used in the opening post picture. She was chosen due to her computer skills, as displayed in the Melancholy of Haruhi Suzumiya show. Prior to the advent of the catalog, the picture was how users quickly recognized the thread on the board, and it stayed that way for quite a long time. The original Yuki was upside down, was wearing a cap and held onto the SICP Computer Science book.

At some point, however, variations of the image began appearing. Yuki was edited to hold different books. She quickly became a vehicle for subtly communicating and making people aware of the OP's favorite programming language. Those little changes paved the way for more trolling. Near Christmas of 2012, images of other anime girls began surfacing and some people started creating threads with them. The very act of changing the picture upset a number of users, who disliked the seemingly unnecessary change. They fought back against it, interrupting discussion and openly chastising the OP for using it. Other users liked the new pictures; it provided an opportunity to see their favorite characters featured in the OP of their favorite thread. Adding even more fuel to the fire, trolls quickly recognized this pattern and capitalized.

Entire days were wasted discussing which picture was the correct one. Multiple camps were formed: the "Yukifags", those who opposed the change and wished to go back to the original picture, the people who wanted other images and the people who didn't care. Eventually, a full-fledged thread war broke out.

Originally, Daily Programming Threads were only created when the last one died due to autosage. After these events, people started creating threads early, as soon as the bump limit had been reached, in order to ensure the picture they wanted was used. This would piss off a huge part of the audience, which would quickly report the thread, denounce the OP and link people back to the original thread. Sometimes, mods would delete the second thread, thus ending the conflict. However, it was eventually discovered that if the second thread had enough programming discussion, mods would not delete it. People quickly took advantage of that weakness, going as far as samefagging their own thread by cross-posting content from the original thread in order to prevent it from being deleted. It usually worked and in response, when the original thread died, people would go on to create a second competing thread in the pretense of "perpetuate the use of the correct image". This trend would degenerate to obvious trolling with time, to the point other /g/ users started to grow annoyed with the DPT and telling everyone to move to /prog/.

At the time, the /q/ - 4chan Discussion board existed. When the situation got sufficiently out of control, threads were made about it. Trolls often replied there, openly taunting people in all groups, adding fuel to the fire, using people's messages to shape their strategy.

One of the Asuka images

Some of the most notable and forced pictures were the ones featuring Asuka. They were the first "new pictures" to appear, most likely because the time period coincided with the Rebuild of Evangelion 3.0 premiere in Japan, which was a huge topic of discussion in /a/.

Nowadays, pretty much any picture can be used. Though meta discussion doesn't happen as often as it used to be, comments and discussion regarding the image can still be seen once in a while. 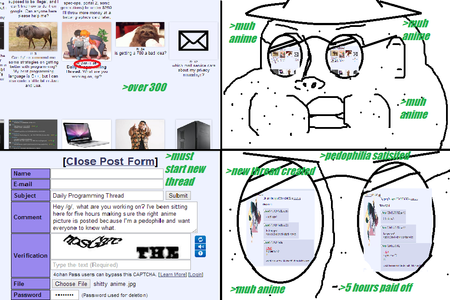