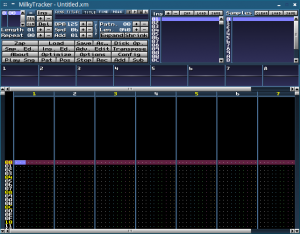 Music trackers are programs used to compose music on a computer. They are totally badass and you feel like a badass dude when you compose your first track with one. They take a top-down grid based approach and usually only deal with samples, rather than software instruments. Examples of common trackers are Renoise, SunVox, MilkyTracker and FamiTracker.

The first tracker was one called the Ultimate Soundtracker and ran on the Amiga computer. Over time new computers, operating systems and trackers have emerged. The tracker called FastTracker II brought the birth of the Demoscene.

The basic concepts of the music tracker is the grid that you edit your notes, and the instruments that handle which sounds are used and organized. Your computer's keyboard models real piano keys, using the Z as C model. Trackers usually utilize a hexadecimal numbering system making it ideal to compose music with a 4/4 time signature.

Every tracker handles patterns in its own way. Most of the time though, each tracker shares the concept of a pattern, a set of notes and samples tracked out to produce a melody that can be arranged. Each row in each column is usually paired with an effect column where inline sample manipulation can take place.

Effects are an extremely important part of trackers. They bring life and groove to the samples used within a track. In most trackers effects are assigned from 0 through to F, with a 00 to FF parameter. Seeing as each tracker is different, one must reference the manual of the tracker for a list of the effects. More modern trackers (such as Renoise) use the entire alphabet as effects parameters, along with 0 to F to control DSP units, with 0 to F for the parameter and then 00 - FF to set the value of the parameter.

Instruments are usually a single or group of samples used to produce a particular tone. This can be a kick drum sample, or a primitive tone waveform like a sine wave or sawtooth wave. Some more modern trackers use software instrument plugins such as VSTs or have software instruments built into the application.

Below are some examples of how the above explanation may be laid out on a screen infront of you.