From InstallGentoo Wiki
(Redirected from NSA)
Jump to: navigation, search 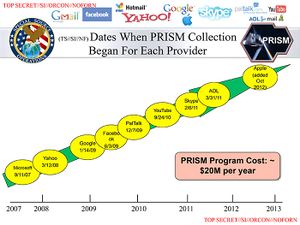 The PRISM Program, showing companies that voluntarily joined the spying program from 2007 to 2012. It is best to avoid these companies.

The National Security Agency, or more accurately, the National Spying Agency (and sometimes comedically No Such Agency) is an American government agency that collects and harvests data to keep track of, well, everything that it can. Think of it as "Big Brother" in 1984. If the NSA wants to spy on you and collect intelligence on you, it will.

The National Spying Agency has repeatedly violated the public trust and has been spying on Americans (for profit) since at-least 1992. In 2006, it was revealed that they were using a closet in the New York AT&T building since 1998. This was long before the Snowden leaks.

The NSA has announced it will minimize its phone surveillance, as if people actually expect to believe that. The claim is that it has caused too much stress for the organization, and too much financial grief.

Snowden has released a list of countries that collaborate with the NSA. If you have any sort of webhosting or VPS, do not host it in any country listed below. There is, of course, no guarantee that countries NOT listed here are any better, but these are countries KNOWN to be problematic.

Oversaturation is a good tool. Dox yourself every week with hundreds of fake information, and it can make a difference. Dox others. Purposefully act out of the ordinary. If you think you are being followed, give them a show. Act like a street performer in areas you've never been to as if you're on a hidden camera show. You are number 6 and they are number 2.