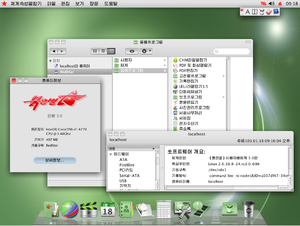 A screenshot of Redstar OS v3. While this is the most recent version that the western world has access too, Redstar OS v4 is supposedly released and in use

Red Star OS (붉은별) is a GNU/Linux distribution created by the government of the DPRK (North Korea). it was first developed in 1998. It is based on Fedora. It used a modified form of KDE designed to emulate MacOS. Previous versions emulated Windows XP. A CD of the distribution reportedly costs the equivilent of USD $ 0.25. A version for Android phones exists.

Red Star OS is currently the dominant Operating System within the DPRK, meaning that in North Korea, it is the year of the Linux desktop.

Modified version of Firefox (named Naenara) which has multiple telemetry features for the DPRK government. Other software includes a text editor, an office suite, an e-mail client, audio and video players, and video games. Version 3, like its predecessors, runs Wine, a piece of software that allows Windows programs to be run under Linux.

There is also watermarking built into the system, which marks files so that they can be traced back to the original creator/distributor.

Despite being from North Korea, there are actually no known backdoors into the system. Which cannot be said for operating systems such as Windows and MacOS, which come from the freedom filled America.