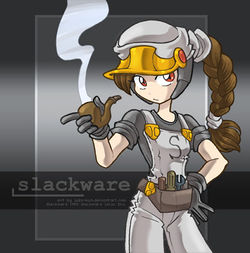 I'm a fucking moron from the sticks. I probably have no clue what I'm doing.

What the hell do I use:

(why the fuck do you care? I'm just writing this because I'm bored and practicing markup.)

At one point I had a decent gaming build w/ a Dell 16:10 IPS monitor and an old IBM Model M keyboard, both of which I thrifted. I had gotten into Linux, specifically, and IT in general, because I was a lonely Middle Schooler who loved lurking /g/. (Tbh, I never posted as I was sure they'd find me out and ban me.) I since lost all of my computer crap in a house fire.

Post-housefire, I was just depressed and didn't feel like building another desktop. I bought a Thinkpad T410 because it looked like a good price on Newegg and the Anons in /ThinkPad General/ seemed to think that it wasn't the worst choice. I've been quite happy with it - I've had it for 4 years now. I maxxed out memory (8Gb), but between with a shitty Intel Ironlake graphics card, Kerbal Space Program on it's lowest space program is the best I can go, vidya-wise. When I started college I got a cheap dome keyboard from Amazon because I knew that if I bought the Cherry MX Blue of my dream, I'd likely spill an entire Big Gulp on it the first day and be SOL.

Linux was my only social life from ages 13-17. I've been partial to Debian because I really "learned" GNU/Linux using Crunchbang and LinuxBBQ, mainly growing in my limited know-how due to their excellent forums. Today I mostly use either Slackware or build on top of a minimal Debian install; I used to use Debian Sid quite a bit, but I've found myself having less time to fix breakages, so I've mainly stuck with Stable.

I used to be an edgy Windows hater, but I've since mellowed out. I've retained a deep hatred for the violations on personal privacy by Microsoft, especially in Windows 10. I'm mostly on Windows 7 anymore, with a small encrypted Slackware partition for *nix stuff, and VirtualBox on Windows for screwing around with CentOS and Debian if I'm ever bored, although between college, wasting time playing the Kerbal Space Program, and doing /k/ stuff, that rarely happens anymore. 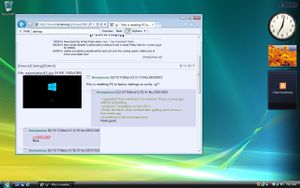 This is the ideal factory reset OS. You may not like it, but this is what peak performance looks like.
Retrieved from "https://wiki.installgentoo.com/index.php?title=User:Emacs-fu&oldid=34220"