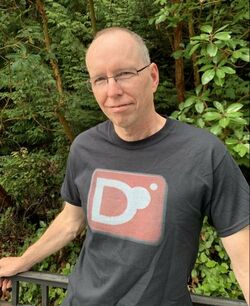 Walter Bright is a very smart mf who creates compilers for breakfast. Right now his main focus is working on the D language.

He has a degree in mechanical (aeronautical according to some sources?) engineering. At some point he gained interest in programming and decided to write the classic wargame Empire.

Later on, he was writing some stuff for MS-DOS in C, as that was the only feasible language at that time. Being extremely fed up with to how absolutely disgusting machine code his sources compiled, he decided he should make his own compiler. He told his plan to a colleague who bluntly replied with "Who the hell do you think you are thinking you can write a C compiler?". The absolute madman actually went on and wrote the Datalight C compiler, who was so fucking efficient for its time that:

Such a concept was new enough that the compiler got into trouble in the computer magazine benchmarks because the optimizer figured out that the benchmarks did nothing and so deleted all that dead code — the journalist assumed my compiler was broken or cheating and Datalight C got a bad review. (This, of course, made me pretty mad, but there was no ubiquitous Internet in those days where I could post a riposte.)

At some point he got his hands on uncle Bjarne's book on C++, and being the absolute madman he is, he decided to write the first C++ compiler which compiles to native code.

In the 90s he decided it would be a fun idea to write a Java compiler which generated native code, along with a Javascript compiler/interpreter.

I was out jogging one day with a programmer friend who said, "You know, what the world is desperate for is a Java compiler that generates native code. You'll make a mint off of that! I use Java and this is really needed." I told him that, coincidentally, I had written one and he could start using it right away. Of course, he never did.

He claims on his site that his Java compiler still is the fastest one.

Being the absolute madman he was, he even outgrew C++ and wanted a language which not only fixed the gay of C/++, but also adds in some features of his own. At the time there were already some notions of a 'D' on usenet, but he decided to write and submit his own. It gained quite some traction and eventually grew out to be the language it is today, being used by some big corporations such as ebay and Netflix.

Right now he is employed by Facebook to write a fast C/++ preprocessor in D.