From InstallGentoo Wiki
(Redirected from Yum)
Jump to: navigation, search

dnf is a package manager used to manage RPM packages. It's used in pretty much all Linux distros based around the RPM package format, and is especially notable for being used in Red Hat distributions as well as in Fedora. It was introduced to Fedora in version 18, and outed the deprecated Yum in Fedora 22.

DNF is much better than Yum was, because its rewrite addressed yum's worst problems, such as bad performance and high memory usage. 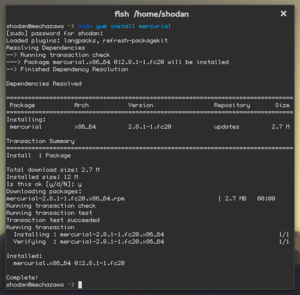 Like most package managers, DNF is quite simple to use. It requires root privileges in order to install and remove packages.

To install a package, issue:

To remove a package from the system, issue:

DNF supports updating individual packages or the entire system at once.

To update all the packages on the system, issue:

Sometimes, dnf will fail to resolve dependencies for various reasons. You can use the --skip-broken option to skip packages whose dependencies could not be resolved:

To update an individual package, simply pass its name as the argument:

You can search the remote repository for a package: