DELETION CANDIDATE
Relevant discussion may be found on the talk page. Reason: Just some US phone carrier shit, nobody cares when you don't have AT&T or Sprint in your cunt

Here is a list of US Cell Phone Carriers and how you should feel about them. While it is highly recommended you don't use cell phones, the carrier you choose is important if you will use them.

Sprint is bad, and all Sprint users should feel bad. Their ancient CDMA2000 3G network is slower than even AT&T's EDGE 2G network, and their tiny 4G LTE network exists in roughly 30 markets nationwide, compared with 100 for AT&T and 400 for Verizon. If you really need unlimited data, go with the $30/month T-Mobile no contract plan.

As reviled in a 2013 leak, (and speculation long before that), It is safe to assume that anyone using AT&T services (whether Cellular or Landline) is being monitored by the NSA. It is safest to not even call people you know use the network.

However, AT&T is one of the oldest telephone providers in the United States, and the World. AT&T, formerly a part of the Bell Network (which owned Bell Labs) had helped with the development of the original UNIX system, as well as BSD System IV. They also were the singular developers of Touch-Tone dial. At one point they were the largest company in telephony. However, in the late 1970's, they were met with anti-trust lawsuits that had broke up their monopoly into sub companies. So, they are so old and well skilled, they know what they're doing. There's that point to go off of.

T-Mobile is generally regarded as safe in terms of privacy, however they were found to violate net neutrality in early 2016. Under newly-implemented US Law, they will be fined until they stop doing this. Some basic issues besides the philosophical issues are call quality is spotty, and T-Mobile phones contain proprietary OEM software that you can not remove from the phone, the majority of which is for services no longer offered by T-Mobile, and break the Phone's services when an update to the Phone's software happens (Such as when Windows Phone users upgraded from Windows Phone OS 8 to Windows Phone OS 8.1, the "WiFi Calling" app broke not only the call-connectivity, but SMS messaging as well.

Verizon is a carrier that dates back to the early days of cell phones. Generally regarded as safe (and fast), Verizon rarely gets call drops and has decent prices for users.

Tracphone is the literal worst service provider. With a corporation based in India, and Customer Support that can only be reached at India-daytime, this phone company locks users out of their own phones, charges outrageous prices for their "Minute Cards", and drops when you go outside. Furthermore, the Mobile Web charges 16 "minutes" for 1 minute of use, ignoring data usage.

A decent enough phone service to use if you are the only user. If you were to make a family plan, however, it would be much more expensive. 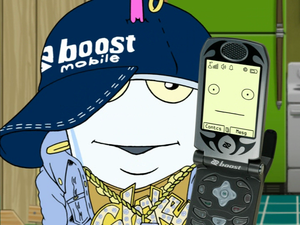 They didn't even get paid for this

Boost Mobile is shit. Enormous Prices, as well as poor call reception, they are only known for their presence in an older episode of Aqua Teen Hunger Force.